Never before had a horse been inside the Royal Albert Hall, until now! In June 2010, Channel 4 commissioned a series of programmes promoting the 2012 Paralympic Games. When Lee Pearson, a gold medal Paralympic dressage rider was asked to appear, the production company approached Fieldguard for our help and advice, so it was a very exciting project for us.

Lee was to perform freestyle dressage to music, also known as kur, accompanied in the background by ballet. The chosen excerpt was ‘The Dance of the Sugar Plum Fairy’ from Tchaikovsky’s Nutcracker ballet. Normally a solo piece, this time it was danced not only by the horse, but accompanied by four Prima Ballerinas from The Royal Ballet.

The logistics proved extremely difficult, for the floor of the Albert Hall is 15’ below ground level and can only be reached through the main concourse and then down steep stairs between the seats in the auditorium. To complicate matters further, the horse had to be on a sandy, non-slip surface while the ballerinas needed a smooth, semi hard surface FREE of sand.

The first problem was the hard and slippery floor tiles around the concourse, so the horse was fitted with four thick felt boots to prevent both slipping and damage to the tiles.

Next, to the ramp. This would have to be high sided, strong enough to support the weight of the horse and, most importantly, non-slip. The Producers contracted the construction of a large, high sided wooden ramp down the stairs, far too steep for a horse to normally negotiate. Fieldguard staff then attached our non-slip horse box ramp mats (M11) to the ramp and the horse was able to come down and back up the ramp with ease.

Now the central area of the Albert Hall is a wooden suspended floor; so slippery, hollow beneath and therefore noisy for a horse to walk on, never mind perform dressage! This was overcome by Fieldguard laying our heavy rubber sheets (M10) around the perimeter of the mini ménage in the centre of the floor, in to which was put 20 tonnes of sand. The sand, of course, had to be manually installed, through the corridors and down the new ramp by wheelbarrow!!! When laid, both did their jobs superbly, for the sand of the ménage was contained by a wide barrier of non-slip rubber mats.

The only way to access the Albert Hall with 2 one tonne pallets of rubber mats is via the labyrinth of corridors beneath the auditorium and up through the main floor on a huge hydraulic lift. As we had lost our bearings underground to then be confronted by the beauty of the Albert Hall and the great organ pipes as we rose through the floor was a sight to behold.

As there had been a concert the night before and one again the next night, the setting up and striking of all the systems, together with the filming, had to be accomplished in the one day.

We were mightily impressed at the efficiency of the whole operation, as gangs of men with barrows wheeled the sand out to waiting lorries in less than half an hour, while the carpenters took less than an hour to construct the ramp and even less time to strike it again. However, what was the most impressive was the behaviour of the two horses involved. They were calm and curious throughout. Never put a foot wrong, even when being lead down passages normally reserved for human traffic.

It was the first and only time that a horse has ever been inside the Albert Hall, and a very, very long day for everyone concerned.

A side issue was that, being a mail order company, we have never found the need for any ‘company clothing’. At the Albert Hall, everyone from each of the many companies, bar Fieldguard, sported company shirts. Our staff felt disadvantaged so there was insurrection at work and a call for Fieldguard company tops, which we all now proudly sport when working.

On a final note, the (non-horsey) production company had these signs pinned up around the Albert Hall. “Please be aware of the horse at all times. No sudden movements or loud noises, no flash photography, also be aware of leaving objects around that could startle. Please read the risk assessment for more information and DON’T STAND BEHIND IT”

The programme was aired on 28th August and Fieldguard were very proud to have been involved. 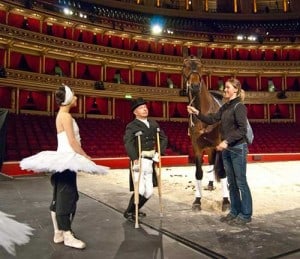 Energise your fencing with the power of the sun

Fieldguard has always recommended Speedrite Energisers as they are in our experience, are the most... read more

Let us help you plan ahead this August Bank Holiday

Do you need any rubber matting, electric fencing, or accessories for projects you’re intending to... read more