Diary of a Dog – A visit to the vet

Diary of a Dog – A visit to the vet

As recounted by the recently retired Greyhound, Bandit. Still new to domestic life at the time.

This is an excerpt from his book ‘The Diary of a Dog’ illustrated by Viv Levy and published by Fieldguard Ltd. All proceeds are remitted to Greyhound rescue and re-homing, through either Celia Cross Greyhound Rescue or The Retired Greyhound Trust.

And it was an early start. No breakfast and he took an indecent interest in my toilet arrangements. My goodness it was bitterly cold with frozen ground, icy roads and the odd small snowflakes. Then it was a mad dash through the increasing blizzard to the big town. Not the big town where we shop nor the even bigger town over the hill but the big town that is all narrow streets and one-way gyratory systems. Five miles out there was a traffic jam and we were late so he took a long detour down very narrow lanes driving like a manic Mr Toad. We did arrive on time though and the surgery was all warm and cosy with lots of nice nurses billing and cooing over me (years of practice with handlers and kennel maids so I do have a certain ‘something’ and know just how to handle wimmin – you know the sort of thing, stand pressing against their legs all butch and masculine, looking away but give them a soulful glance over-the-shoulder, gets them every time).

In the waiting room I just lay contented in the middle of the room – and I can take up an indecent amount of space – with people stepping gingerly over me all the time but Will (a Lurcher and my house mate) was very put out for there was a snapping snarling little dog there as well. Will doesn’t rate small snappy dogs probably because she is small, well matronly, in build. Well smaller than I anyway and that definitely gives her a complex. Have you noticed that people always have egos in inverse proportion to their size?

Now back to the X-ray. They eventually took me through to a room full of comfy cages so, never one to miss a trick; I had to test out one of the larger ones. Hmm, it was good so I curled up contentedly. Snarling, snappy came into one of the smaller ones on the next floor. Then they came and gave me that little prick in my leg that usually means slipping into Morpheus; it did, so I never actually saw this mythical beast the X-ray machine. A real bugger because I like to inspect everything. I woke feeling very woozy indeed. Definitely groggy and the pins had minds of their own.

In due course he and Will turned up and out we went – only when he opened the door to the surgery there was a blizzard raging, temperature well below freezing and snow some inches deep. Not for me! I turned back into the nice warm surgery, and refused to move. Then the ultimate indignity, for he scooped me up and carried me to the car.

Did I tell you about us and cars? Well all my life I have been lifted in and out of transport and see not the slightest reason to give up the practice. Besides, I like it for in my professional life it was the one time I ever had really close human contact. I taught Will that on day one. When we got to the car he was in a mess for he could not unlock it and lift the door as he was holding Willow’s lead and me. He callously dropped me into the snow and then had the nerve to ask us to jump up. Moi!? Happily we’d agreed long ago that neither of us would do any such thing so he had to do it. There were waves of bad vibes from him.

The journey home through the thick driving snow appeared to be a bit of a nightmare. At least I think it was for I was still drowsy and in quite a fog about what was happening. It wasn’t our car for that will go through anything but the other fools on the road. People seem to lose all reason when there’s a bit of snow about. You can see them; engines screaming, tyres flailing and the car just sits doing nothing except go in the opposite direction, or worse still, just sits. Twice he stopped and gave mini-driving lessons. One woman was overwhelmed with gratitude and all he’d done was tell her to put it into a high gear, lift the clutch and not touch the exhilarator.

Home and he decided I needed to eat something – the very last thing on my mind. Have some lovely yoghurt; no thanks. Well, some milk; perish the thought. What about some scrambled egg? Definitely not! He must have got that in for we are a no egg house for he can’t cook eggs. Some of your favourite mackerel in tomato sauce, over my dead body. Then, the ultimate irresistible option, some nuts soaked in vegetable oil. Now that is lip smacking ambrosia. Had a desultory mouthful, thought about it for a few minutes, saw him add lashings more oil so felt duty bound to finish them off as he had gone to so much trouble. Actually it was just what was needed for felt replete and comfortable so snuggled down into my bed, he pulled the blanket over me and that was it until the morning. Oh, except that I did relieve myself in the utility room in the middle of the night when he came down for his midnight snack. He allowed it without demur. Actually I don’t think he even noticed. Not the sharpest knife in the box at that time of night.

This is the hilarious, day-to-day diary of Bandit, a four year old retired greyhound who lived at the Celia Cross Greyhound Rescue Centre until he was adopted by Bertie and taken home to live with lurcher Willow. They have a whale of a time. Bandit, who thinks he’s very handsome, is particularly naughty and loves shredding bog rolls and nicking pigs’ ears from the vet’s.” Horse & Rider

Full of humour with an insight into the nature of greyhounds from their joy of running to their devotion to the duvet. Ideal for the older reader.” Homer Magazine 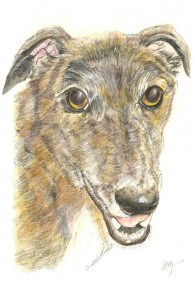 A note from the Author

You can read all about my first three months in retirement in my book ‘The Diary of a Dog’.

Rumour has it that my insights have helped many an owner with their first retired racing Greyhound. A sort of do it yourself manual on a type of dog that is unlike any other in behaviour. We like to keep ‘owners’ on their toes.

Actually, they are nothing of the kind, we Greyhound are independent souls, so no one owns us.

The Diary of a Dog book, written by the retired greyhound, Bandit, with some help from his person no doubt, is a funny, poignant, and very moving account of his first months in a domestic home. A must read book.

Energise your fencing with the power of the sun

Fieldguard has always recommended Speedrite Energisers as they are in our experience, are the most... read more

Let us help you plan ahead this August Bank Holiday

Do you need any rubber matting, electric fencing, or accessories for projects you’re intending to... read more